Susanna Curtis, born in London, raised in Glasgow, has been working in Germany as a dancer and choreographer since 1988, and has been based in Nuremberg since 1995. She lives there with her husband and has two student sons. Like many freelancers in the field, she alternates between performing and choreographing engagements. As a dancer she prefers to work in the sphere of dance-theatre, combining voice with movement, character development with dance steps. As a choreographer she has a very broad spectrum of creation, ranging from independent dance-theatre productions to musical to film choreography, working with a pool of professional dance-artists, actors, singers and filmmakers. She is open to new experiences and opportunities to deepen her knowledge and this is reflected in her performative and choreographic work.

Susanna Curtis’ dance training in classical ballet and contemporary dance began in Glasgow, Scotland. After reading languages at the University of Oxford, she received a guest student scholarship to the Rotterdamse Dansacademie in the Netherlands. During her training she danced with such groups as Scottish American Ballet, Oxford Movement Theatre, Gregory Nash Group and Wiener Operettentheater. Throughout her career she has continued to broaden her experiences with further training in contemporary and classical dance, improvisation, mime, acting and clown technique.

Her first engagement in Germany was with B.W.Gung Tanzkompanie in Ulm (1988 – 1992). From 1992 –1993 she danced with the Ballett der Städtischen Bühnen, Regensburg, and from 1994 to 1996 she continued to work in Regensburg as ballet mistress and assistant to the ballet director. At the same time, (1993 – 1997), she was a member of Czurda Tanztheater, Fürth. Since 1997 she has worked on a freelance basis, being involved in projects in Nuremberg and throughout Germany. As a dancer she has worked regularly with comp.aexx.rauh, Nuremberg, and as performer/actress with Theater der Klänge in Düsseldorf, Theater Mummpitz, Nuremberg ,wilde.verwandten, Nuremberg and for choreographer Alexandra Karabelas. Her work as dancer and actress has led to her taking part in numerous performance projects, walk acts and events. Since 2005 she has been a member of KlinikClowns Bavaria, working as a clown in children's hospitals and old people’s homes.

In 2003 Susanna Curtis founded her company, Curtis & Co. – dance affairs. Since then she has realised a new dance theatre production on a yearly basis. Her work has been financially supported by the Cities of Nuremberg and Fürth, by the Region of Mittelfranken, by the State of Bavaria and the Cultural Foundation of the Sparkasse Nuremberg. Since 2010 her works have been premiered in co-production with Tafelhalle im KunstkulturQuartier, Nuremberg. Her productions have been performed throughout the region, on tour in Germany and abroad (e.g. return2you, Glasgow 2010; going solo, TanzArt Gießen, Tanzfestival Bielefeld 2016, Schleudertraum Regensburg, Ulm Moves, Bayerische Theatertage).

In 2014 she was awarded the City of Nuremberg’s Prize for Culture for her work. In November 2015 she was designated “Artist of the Month” of the Metropolitan Region Nuremberg and in 2017 the City of Nuremberg chose her to represent the city in the field of culture in a three-year advertising campaign initiated by the Metropolitan Region. In 2020 she was awarded the Wolfram von Eschenbach Cultural Incentive Award of the Region Middle Franconia. She is a founding member and committee chairperson of the Tanzzentrale of the Nuremberg Region, a collective of independent choreographers, managing rehearsal space, open classes and regular joint productions. In 2017 she was elected to the board of the Bavarian Federal Organisation for Contemporary Dance.

Susanna Curtis created dance and dance-theatre pieces in Oxford, Rotterdam, Ulm and for the Edinburgh Festival Fringe. She has also provided the choreography for many other productions (plays, musicals, operettas, revues) in municipal theatres throughout Germany – including Faust (1996) and The Rocky Horror Show (1998) in Regensburg, Faust (1999) in Trier, The Black Rider (1997), Junges Theater Bremen and My Fair Lady (2012), Kiss me,Kate (2013), La Cage aux Folles (2014), Charleys Tante (2015), Frankie Boy (2016) Städtische Bühnen Lahnstein. In the dual role of director-choreographer she has also worked for film, promotional events and for singing groups.

She has taught both contemporary and classical dance for many years on a regular basis and for workshops. More recently she has taught clown technique, improvisation and awareness for corporate training events (e,g, Adidas AG). In 2016-17 she was artistic director and choreographer of the project Mirrorworld, a school project, funded federally by “tanz + theatre machen stark”. 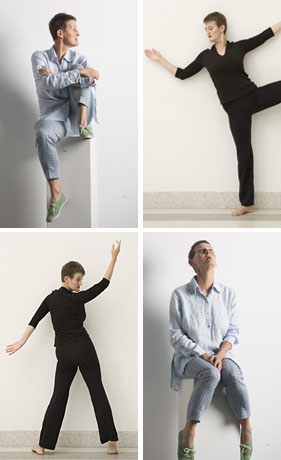